OneThree Biotech was born out of the largest precision medicine institute in America with the purpose of decreasing the failure rate of bringing therapeutics to market using biology driven artificial intelligence. Our technology was builtin a lab setting; allowing us to engineer our methodologies around real-world results. While working with major biotech and pharma partners; we’ve validated our predictions through work in target discovery, toxicity prediction, biomarker selection, and much more. In this white paper, we’ll discuss the OneThree Drug Synergy module (initially developed and validated through a partnership with AstraZeneca) and how it was used to identify synergistic combinations for resistant gastric cancer patients.

Combination therapies have been shown to increase efficacy, circumvent acquired resistance, and even lower toxicity. However, experimentally identifying effective combinations is an arduous task due to the overwhelming number of possible combinations. This issue is further exacerbated by patient heterogeneity which leads some combinations to only be synergistic in only a select number of cancer subtypes. Additionally, drug synergy has been shown to work through multiple types of joint mechanisms, again adding to the experimental workload.

The OTB Drug Synergy Prediction module is a multi-task learning algorithm that is capable of predicting the synergistic potential of two small molecules within a specific cancer sample. This module measures the similarity of compounds, both chemically and mechanistically, to determine if they will act synergistically in any given cellular context. Since drug synergy can be achieved numerous ways (ie: target the same pathway, targeting parallel pathways, etc.) the Durg Synergy module includes 5 different algorithms, each designed to capture different mechanistic aspects that may contribute to synergy. This enables identification of not only the predicted synergy level, but also the underlying joint mechanism of action. 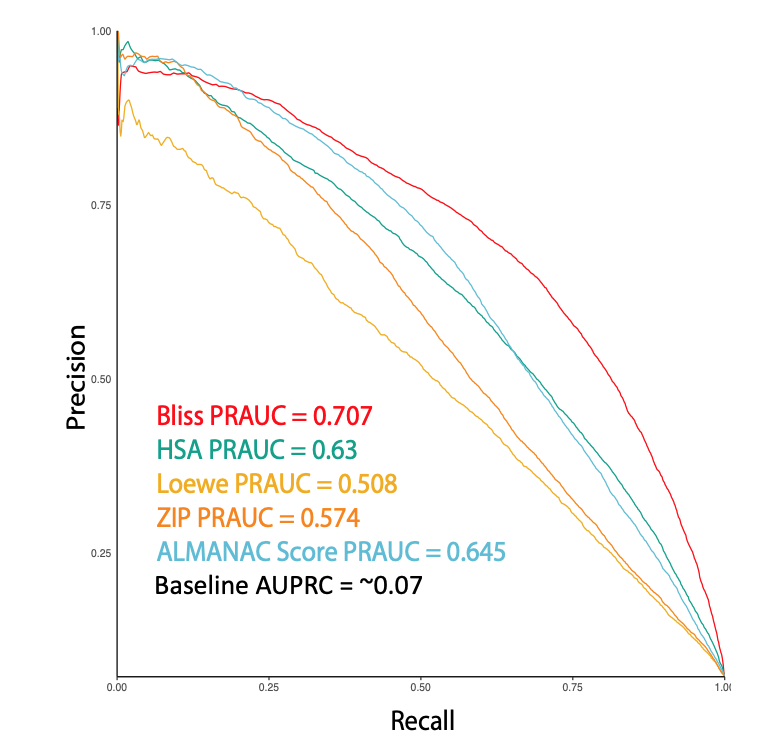 Approximately 50% of gastric cancer patients become resistant to approved microtubule therapies (particularly taxols), making this population a prime candidate for synergistic combination therapy. In partnership with the Giannakakou lab at Weill Cornell, we investigated which compounds would be synergistic with docetaxel in resistant gastric cancer patients. Using the OneThree Drug Synergy module we tested over 4 million compounds and found that imatinib was predicted to have a high degree of synergy with docetaxel in the resistant gastric cancer patient population. Using cells derived from resistant patient populations, we found that imatinib combined with docetaxel showed nearly 10-fold stronger efficacy and sensitized 80% of the texted samples. This finding is now being moved into the clinic and confirm the ability for the Drug Synergy module to identify new treatments with a potential clinical applicability.

Identifying the Mechanism and New Indications for ONC201

Next
OneThree’s Workflow for Target and Compound Discovery

Any cookies that may not be particularly necessary for the website to function and is used specifically to collect user personal data via analytics, ads, other embedded contents are termed as non-necessary cookies. It is mandatory to procure user consent prior to running these cookies on your website.